Do you know someone that’s super into GoPro action cameras– filming with them at every opportunity? Maybe it’s a significant other or close friend. You probably have noticed that it can be fun and sometimes also a little addictive. In this article, we’re going to break down several great gift ideas for GoPro fans. This article is going to assume that the person getting the gift already has a GoPro camera but if they don’t, consider buying them one (see our GoPro comparison chart here). All right, let’s hop in and go over some gifts for GoPro users: 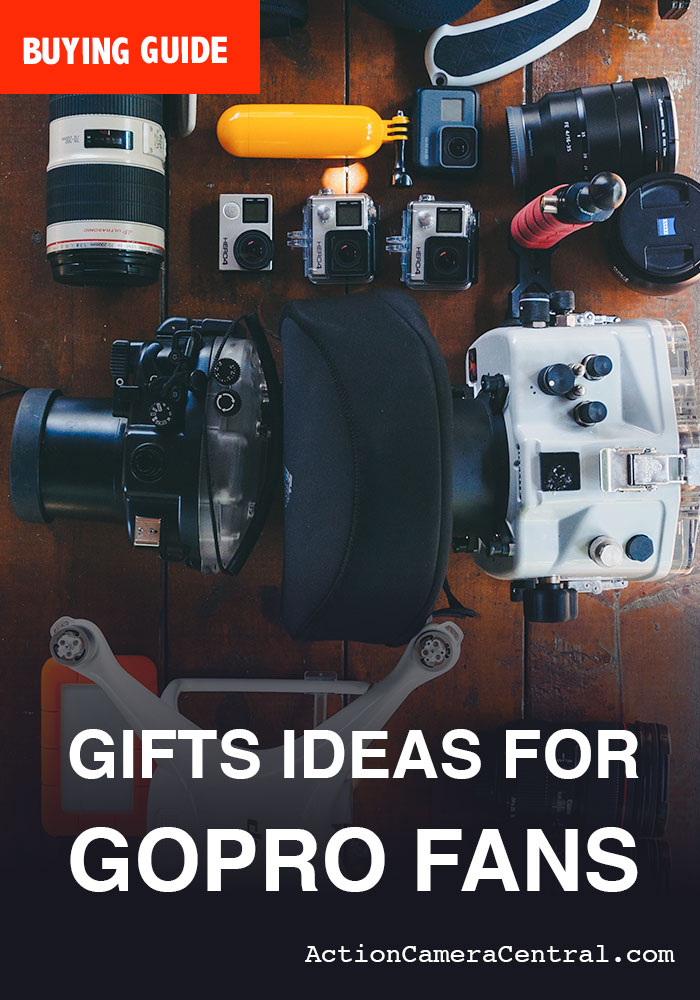 Our GoPro gift guide: gifts for people who love GoPros

GoPro battery life isn’t so great and people who love GoPros tend to be outdoors and on the move a lot. An external battery pack like this USB charger can be a very thoughtful gift for the GoPro lover in your life. They can use it to charge their GoPro batteries, charge a cell phone, or even use it to power their GoPro while filming for extra shooting time use like timelapses. This portable cell phone charger can provide power to multiple devices at once: it has built in cords for iPhones and Android phones, plus a normal USB power port which you can plug a GoPro into using the charging cable that came with the camera. It even has a flashlight built into it which can occasionally come in handy.

One of the great things about GoPro action cameras is that they can be mounted in all sorts fo places. But you can only mount them if you have the mounting accessories. Since these items are easy to lose or damage, a healthy supply of GoPro compatible mounts is extremely useful. This GoPro mount kit is compatible with the GoPro Hero 5, GoPro Hero 5 Session, as well as the GoPro Hero 4, 3 and 2 (so the chances are, no matter which model of GoPro the person you’re buying a gift for will probably be compatible with it).

The GoPro Karma is a drone that you can insert your own GoPro camera into to fly it around and capture amazing aerial footage. It’s also one of the easiest-to-use camera drones out there right now and because it’s made by the first party GoPro company, you know that it’s extremely good quality and well-engineered. This GoPro drone also has a pretty unique feature: it has a video stabilizer component which you can detach and carry around as a handle for your camera that acts almost like a steadicam. Check out this video to understand how the whole system works:

This handle is the stabilizer from the GoPro Karma drone and it can be used on its own as an accessory. It works with multiple motors and a gyroscope to make footage from a GoPro camera come out as smooth and steady as butter. One of the dividing lines between footage that looks professional and footage that looks amateurish is how steady the camera is and with footage shot using the Karma Grip, your footage will come out quite smooth.

Note that this GoPro stabilizer only works with the GoPro Hero 5 camera. If the GoPro lover in your life has an earlier GoPro Hero 4, you can get an additional accessory to make it work with that instead.

If you travel with camera equipment, or even if you don’t, having a nice sturdy hard case can be quite handy. Luckily there’s options like this professioanl-grade Pelican brand hard case for GoPro cameras and accessories. It comes with a pre-cut foam insert designed specifically for GoPro camera users in mind (if you think the GoPro fan in your life would prefer to custom-cut foam you can also get a different version of this case without the pre-cut compartments). With these weatherproof, water-resistant and crush-proof cases, GoPro camera gear is kept safe and sound even in challenging conditions. Plus they’ve got room for extra memory cards, chargers, additional mounts, etc. And if you’re getting this for a spouse who is obsessed with GoPros, perhaps this is an opportunity for them to finally clean up that GoPro mess they’ve left lying around. Tuck everything away in this neat and tidy case, you can suggest! Related article: What is the best GoPro carrying case?

GoPro users often have a variety of memory cards they need to store when they’re out shooting with their cameras. This rugged water resistant memory card holder is a great solution. It’s designed to take a beating and protect the micro SD memory cards that GoPros use. (It will also accomodate normal sized SD memory cards in case they also have a larger camera that shoots with those, like a DSLR or larger video camera.) This case comes in black and has a firm latch to easily but securely close. Plus it has a loop to attach a lanyard to, if desired.

GoPro footage can take up a lot of computer storage space so it’s not uncommon for GoPro fanatics to run out of room on their computers if they shoot a lot of video. This external hard drive that connects to your computer using USB or Thunderbolt is a great solution for GoPro users. It offers 1 terabyte of storage space (enough for between 500 and 1,000 hours of video!) and it’s designed to withstand plenty of physical abuse because it’s enclosed in a rubber bumper and metal case.

A selfie stick for GoPros

Selfie sticks can be kind of silly but they can also be very useful tools for GoPro fans. This selfie stick comes with a mount specially designed for holding GoPro cameras, but it will also work with cell phones and other devices like lightweight cameras. Plus this model of selfie stick also has legs that can work as a small tripod in a pinch. It also features a long range and can get up to 44 inches long when it’s fully extended. Also includes a hand lanyard so the selfie stick won’t get away even if it’s dropped in, you know, a waterfall or something. Find more selfie sticks for GoPro cameras in our related article.