The Best Memory Cards for Use with GoPros

The Best Memory Cards for Use with GoPros

What kind of memory card should you use in your GoPro action camera? For the best results, you’ll need a high capacity micro SDHC or SDXC card with a fast write rate so you can record at high frame rates and long record times without errors. The difference between SDHC and SDXC is capacity (cards larger than 32gb are SDXC; the smaller cards are SDHC but your GoPro can use either). Luckily these memory cards are becoming more and more affordable.

Here are some of the best memory cards for GoPros: 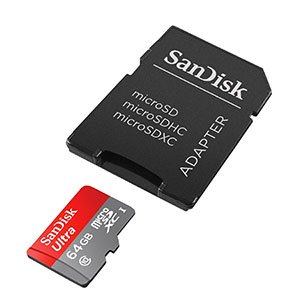 The SanDisk Ultra 64GB microSDXC is a terrific memory card for GoPro action cameras. It has a high capacity (64 gigabytes) and a fast recording speed (Class 10). That’s enough space to record up to about four hours with a GoPro at 1080p quality.

Although GoPro cameras only have a small micro SD card slot, this SDXC memory card also comes with a normal size SD card adapter which you can pop the micro SDXC card into and then insert into your laptop if you have an SD card slot (or an external memory card reader). Note: to save money, this card is also available in a two pack version 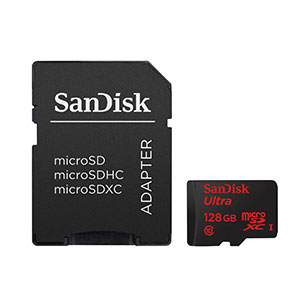 For those looking for bigger storage capacity than 64gb, the SanDisk Ultra 128 micro SDXC card is the bigger brother to the above 64GB card. It has double the capacity and allows for recording time of up to 8 hours on a single card at 1080p quality mode. It’s also a fast Class 10 card, meaning that you shouldn’t run into write delays, and pulling up archived clips on your GoPro for playback if you have an LCD backpack or built in LCD monitor, will be faster than with slower cards. Like the 64GB version, this 128GB card comes with an adapter that will convert your micro SD card to fit in a normal SD card slot reader. 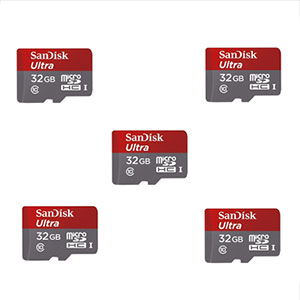 This is a five pack version of the SanDisk 32GB Micro SDHC memory card. 32GB cards can record about two hours on GoPros at a resolution of 1080p before they need to be swapped but with this five pack you’ll have several memory cards to swap out.

These are Class 10 memory cards so they’ll be fast enough even to record at high frame rates like 60fps (which can be slowed down later to achieve a smooth slow-motion effect). This memory card multipack also comes with a micro SD to normal SD card adapter and a USB card memory reader.