What is the best GoPro Gimbal Stabilizer?

What is the best GoPro Gimbal Stabilizer?

Cheap camera gimbals and affordable 3 axis brushless gimbals used to be a pipe dream but recently a huge number of camera gimbals have flooded the market. These handheld stabilizers rely on a series of three motor systems to control roll, yaw, and pitch (up/down, side to side, and angle) working in concert with each other to stabilize a camera, such as a GoPro. Together these auto-stabilizing functions create smooth video, as if shot with a steadicam. Because it’s hard to judge stabilization quality based on written reviews, we’ll be including a video of the results using each gimbal.

Here are some of the best small camera gimbals or 3 axis brushless gimbals for GoPro cameras: 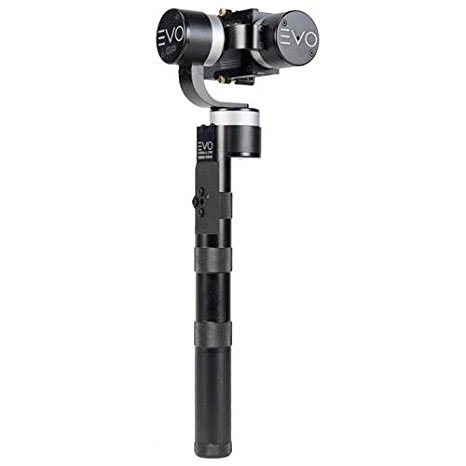 The Evo GP 3 axis brushless gimbal is a one of the best gimbals for GoPro cameras. It’s specially made for GoPros and works well with the GoPro Hero 3, GoPro Hero 4 and GoPro Hero 5 cameras (or any small action camera up to about 5.5 ounces). The Evo GP GoPro stabilizer offers about 4-5 hours of battery life on a single charge, which is generally longer than the battery life of a typical GoPro. But this 3 axis brushless gimbal stabilizer has a trick up its sleeve when it comes to battery life: it has a built in charging cable that lets you extend the life of your GoPro by charging it while it’s plugged in and in use!

Also be sure to check out the bigger brother model, the Evo GP-Pro version which costs a bit more but also gives you a threaded screw mount in the battery grip to mount it on a tripod or monopod, as well as smoother signal processing and a thumb switch style manual control mode to give you more control over the smoothness of the video you’re capturing. 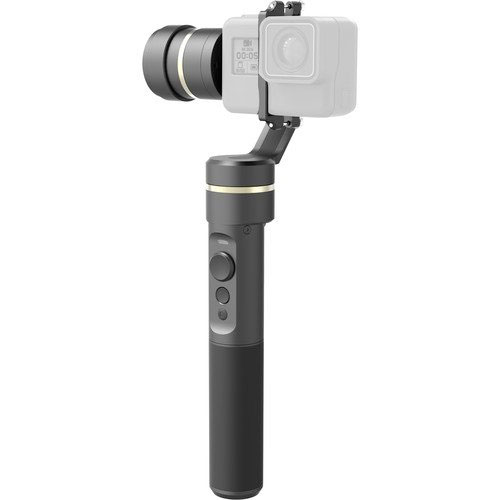 The Feiyu Tech Brushless Gimbal for GoPro is another cheap GoPro gimbal that produces extremely stable footage. It also has the distinction of being the first splash-proof GoPro gimbal. While we wouldn’t take it swimming, it is water-resistant and works fine in the rain or at the beach. Like the EV-Pro model above, the Feiyu Tech GoPro Gimbal has a 4-way joystick button to help control the gimbal direction, though it’s also possible to use it in full automatic stabilization mode.

The Feiyu Tech camera gimbal also has a great battery life: up to 8 hours on a single charge from its rechargeable internal battery. Like the Evo GP GoPro Gimbal model above it can also recharge your GoPro battery from its internal battery. You can use your smartphone to download the free companion app to control advanced settings for the gimbal system as well. This 3 axis brushless gimbal works with GoPro Hero 3, Hero 4, Hero 5, and other similarly shaped small action cameras. 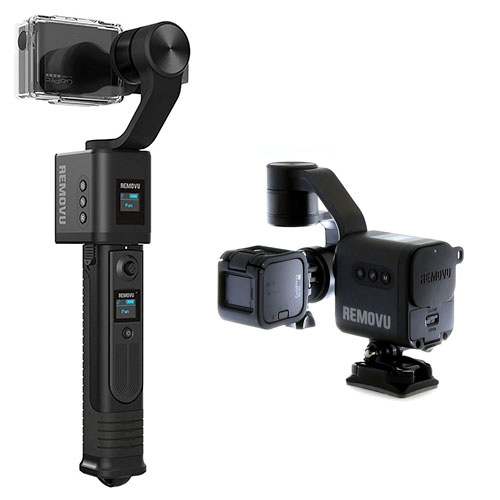 The Removu S1 brushless GoPro Gimbal is another one of the best GoPro gimbals for the money. It features a unique design that allows you to detach the gimbal unit from the grip which lets you mount the gimbal anywhere that you mount a GoPro camera (it has the same standard action camera mounting system). This means that you can wear your Removu + GoPro on a helmet or chesty or selfie stick or other GoPro accessory. When you have the gimbal detached from the handle grip, the handle grip can be used as a wireless remote control to set which mode the gimbal is in and also check battery life remotely using its built in status display screen.

The Removu also comes in a handsome water resistant hard case with padded interior to keep all your gimbal gear neatly packed away when not in use (and it does come with a fair number of accessory bits and bobs). The Removu gimbal for GoPro works with GoPro Hero 3, 4, 5 and even has a special mounting accessory for the tiny GoPro Session camera. 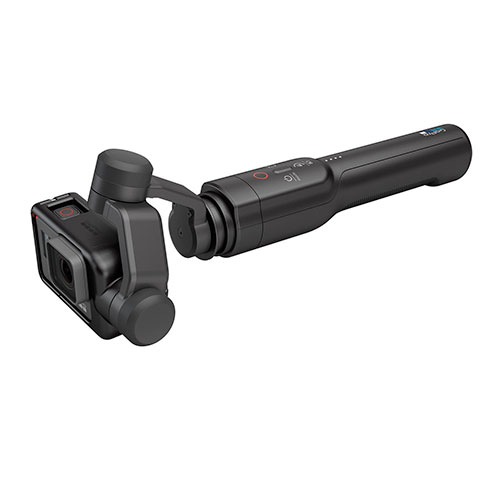 If you have an official GoPro Karma drone, you probably know that drone camera has a built in 3 axis brushless gimbal system attached to the drone itself which you mount your GoPro on. Well, it turns out that you can disconnect the gimbal on the drone and plug it into this grip handle that GoPro makes which turns it into a handheld gimbal for GoPro. Of course, this product doesn’t work unless you have the gimbal from a GoPro Karma drone but if you’ve got one of those, this is the natural choice. Provides a battery life of up to 1 hour and 45 minutes and comes in a carrying case. Works with GoPro Hero 5 and 4 (with a mounting accessory sold separately).

Other notes & factors to consider when choosing a gimbal for GoPro cameras:

What is the battery life like on this GoPro Gimbal?

Keep in mind that you may not need a huge amount of battery life given that GoPros don’t have extremely long battery life themselves (especially if you’re recording in a high quality mode) but it’s nice to have a battery that won’t quit before you do. Another nice feature is GoPro gimbals that can recharge your GoPro when its tiny internal battery is spent.

Is this gimbal splash-proof?

Depending on how you plan to use your GoPro gimbal, whether or not it’s waterproof may not be a big issue. But if you intend to use it in wet conditions like at the beach or in the rain or near water, we’d recommend you make sure you’re getting a GoPro gimbal that’s specifically advertised as being splash-proof or rain-proof.

Is this gimbal compatible with my model of GoPro?

Can this GoPro gimbal be mounted on anything else, or can it only be used on the handle?