The Best Cheap Drones with Camera for Under $100

The Best Cheap Drones with Camera for Under $100

Interested in fooling around with flying camera drones but not interested in spending over a thousand dollars to do it? Drone photography and video is in its infancy but luckily there are now several budget drones available for sale that allow you to dip your toe into the world of drone video and photography for less than a fortune. And learning how to properly fly a cheap camera drone can be an excellent way to decide whether or not you want to invest in a more expensive professional drone setup later on. The stakes are lower if you accidentally crash it, and you’ll get used to what it’s like to pilot a UAV (unmanned aerial vehicle). 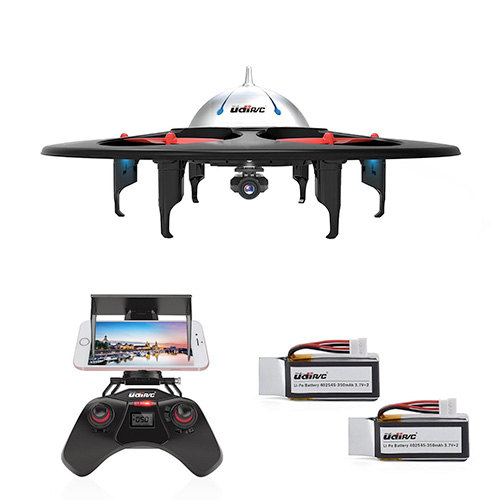 The DBPower UFO Done is a cheap drone with camera under $100 that looks like a UFO! It features a video camera and comes with two rechargeable batteries (each one will last up to about 10 minutes in flight). This camera drone works with your iPhone or Android device to wirelessly transmit video (using a FPV or first person view camera) so you can steer with the included control joysticks even if you can’t see exactly what you’re filming. Shoots video at 640 x 480 standard definition and images at 1280 by 960 (HD resolution). The UFO camera drone has a video transmission range of up to 40 meters but can actually fly up to 100 meters away as long as you can maintain visual contact with it to steer. Although this is marketed as a quadcopter drone, it actually has six propellers. Includes a one button “return to pilot” function in case it gets lost and it can also do tricks like a 360 flip. 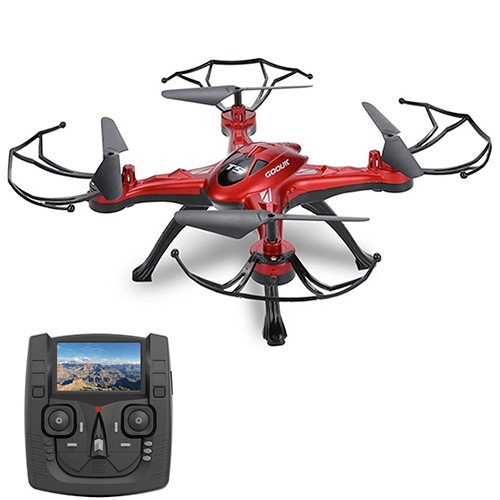 The GoolRC Camera Drone features real-time First Person Video (FPV) transmission straight to the controller which has a built in LCD screen which some users may find preferable to having to hook up their phone to the drone’s wifi system as many other models require. This camera drone will fly for up to 10 minutes and can take HD photographs as well as standard definition video stored on an SD card on the camera. The range of this camera is about as far as a football field and it can fly indoors or outdoors. It also has LED lights so you can fly at night and not lose track of where it is. Includes a “one key return” feature so you can land your drone safely even if you’ve lost track of where it is. 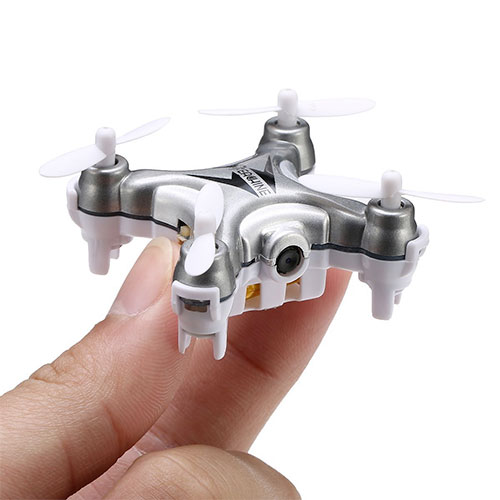 Here’s another cheap drone with camera under $100 that has the unique distinction of being SUPER TINY. This kit (which is surprisingly cheap) includes the drone itself as well as a controller and a USB cord to charge it or get photos and video off it. Runs on AA batteries (not included). Flight time is surprisingly long for an item this small: about 5-6 minutes. It also lights up for night flying and drone recovery (in case you’re not quite sure where it landed). SD card not included. Note that this drone with camera doesn’t include any way to preview the video (FPV) while you’re flying. You’ll need to connect it to a computer to offload the footage or photos after you’ve landed it. 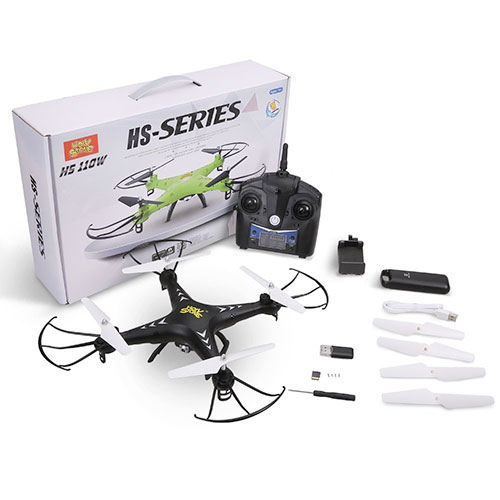 The Holy Stone is unique because it’s a cheap camera drone under $100 that actually FPV Drone records 720P HD video instead of only taking HD photos. It will fly for up to around 10 minutes per battery charge, although you can purchase a separate battery 2-pack kit for more flying time. It also features a “return to home” mode to land safely and it comes with a 4GB micro SD memory card to record footage on. It comes with its own remote control but you’ll need to use your iPhone or Android phone as the screen to preview the footage from the camera while you’re flying since the remote doesn’t have a screen of its own. Also has LED lights for night flying visibility.

Why is the battery life on these drones with cameras so short? Top of the line camera drones today that cost over $1,000 only have batteries that last about a half hour, so these cheap drones with cameras can only be expected to last a fraction of that time. Part of the reason that these camera drones don’t last too long is because the battery powers both the drone itself (and some of these drones have 6 blades which means they have 6 motors) as well as the cameras they’re shooting video or photos with.

Can I get additional battery packs for these drones? It varies from drone to drone, but if flying time is important to you, you’ll want to check to make sure that the camera drone you’re considering has rechargeable batteries that you can swap out.