360 degree videos are all the rage right now on Facebook, and they’re popping up on YouTube as well. So naturally people are wondering: how do you make my own 360 degree video for Facebook? You’ll need a 360 degree equipped camera. Luckily there are several of these VR cameras on the market right now and they’re cheaper than you would expect. Here are our picks for the the best 360 degree camera available today: 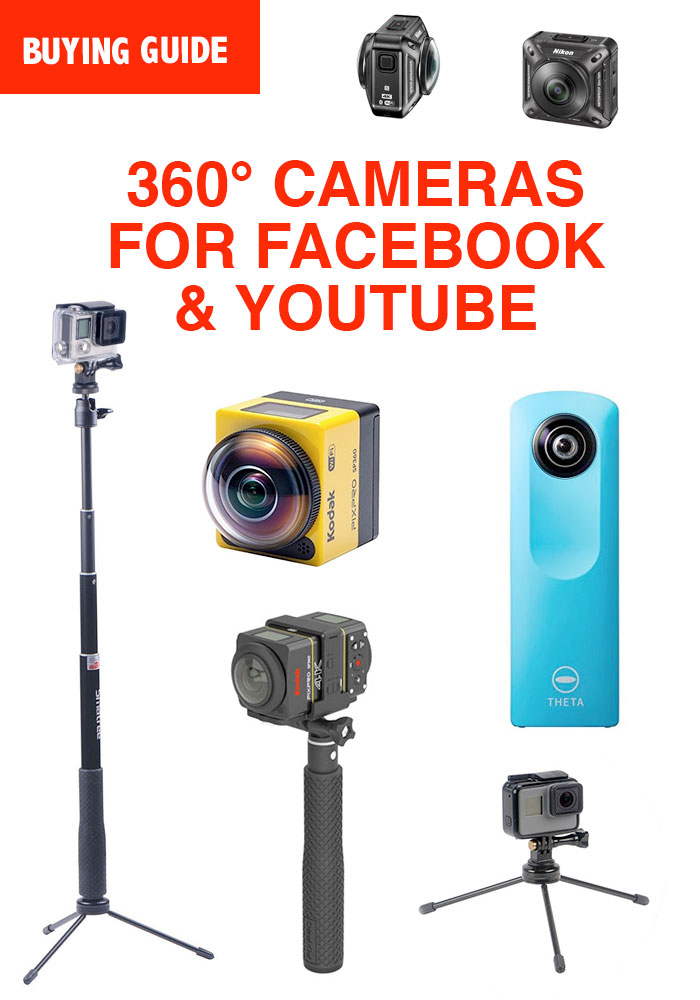 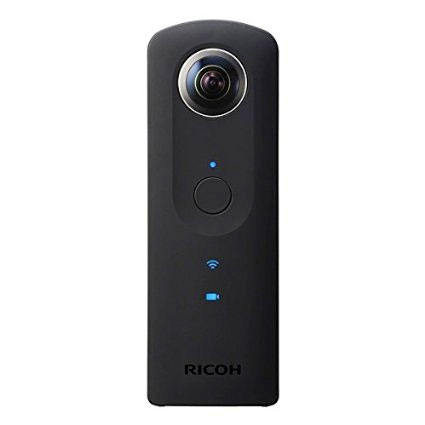 The Ricoh Theta is probably the best 360 video camera today and it’s becoming quite popular. It features a camera on the front and a camera on the back and it digitally stitches the two videos (or photos, depending on which mode you set it on) together, to create a seamless 360 degree experience that you can explore on either your smartphone or computer. The Ricoh Theta uses its two super wide angle lenes to create spherical images which look amazing and can record video for up to 25 minutes at a time on its internal 8GB storage (which realistically is probably way more than you need for 360 degree Facebook videos or photos).

Since the camera doesn’t have a screen on it, you can’t really preview what you’re shooting but since it’s shooting in 360 degrees that doesn’t matter that much anyway! Anything you can see (and more), this camera will capture it. There is also a companion phone app for iPhone or Android which allows you to preview images and tweak advanced settings. You can also download Ricoh’s special software on to a computer, which allows you to tweak photos or videos after they’re taken, but that’s optional.

You can also get accessories for the Theta S spherical camera, such as a water-resistant hard case which will allow you to use the camera in the rain (though you’ll need to use your smartphone app to start the recording since you won’t be able to push the camera’s physical buttons while it’s in the case). 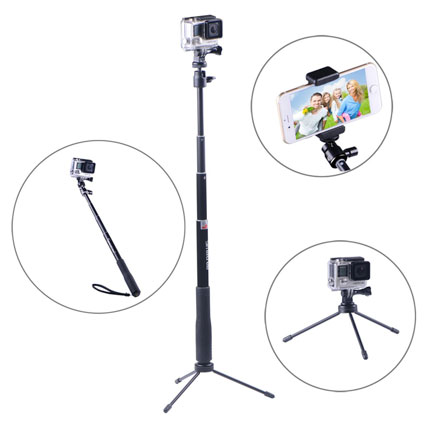 Another accessory we’d highly recommend: this selfie stick with leg support which you can use as a tripod and duck out of frame to get a truly 360 degree photo or video without you holding the camera.

When it comes to capturing 360 degree video or photos, the Ricoh Theta S is not the only game in town. There are several alternatives that will also allow you to capture 360 degree photos and video. Here are some other contenders for the title of the best 360 camera: 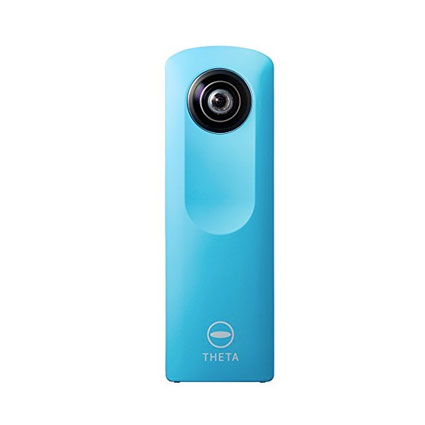 The Ricoh Theta M15 is the little brother model to the Theta S. It records shorter videos (up to 3 minutes long) on its 4GB internal storage.

The Theta M15 comes in four colors: blue, yellow, pink, and white, and, like its bigger brother the Theta S, it also can also be controlled via your smartphone (with record modes ranging from video, still image, or interval still photos every 5 seconds up to every 10 minutes for timelapse). Since it’s less expensive than the higher quality Theta S model, those looking for a cheap 360 video camera might be happier with this option. 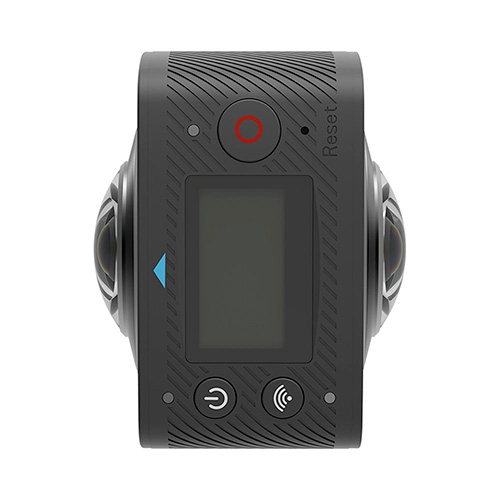 The TopVision 360 Degree Panoramic VR Camera sports dual identical wide angle lenses– one on either side of the camera, to shoot true spherical 360 degree video. This VR camera records both stills and video and works with a free smartphone app that helps control the camera and enable certain features, as well as software for your computer to stitch videos together afterward. Comes with an adjustable mini tabletop style tripod. 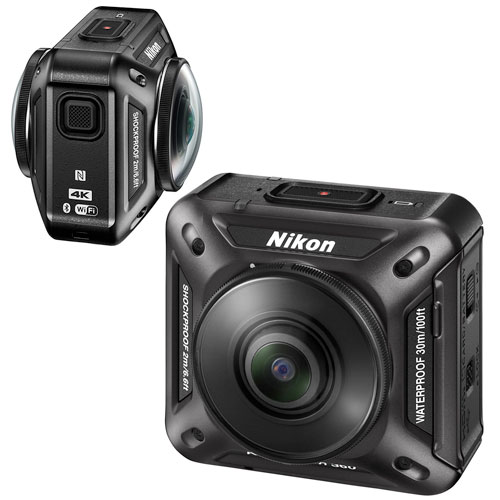 The Nikon KeyMission 360 Degree Camera offers identical dual lenses (one on the front and one on the back) that combine to provide a spherical 360 degree view. It records up to 4K as well as several lower-resolution HD modes. The Nikon KeyMission also shoots still photos and is waterproof up to 100 feet without additional waterproof housing (though you will have to swap the included lenses it’s using if you want to use it underwater). The KeyMission also works with an iPhone/iPad and Android app to preview shots since the unit itself doesn’t have an LCD screen– and frankly it doesn’t have room for one with cameras on both sides! Weighs only 7 ounces and records on microSD cards. 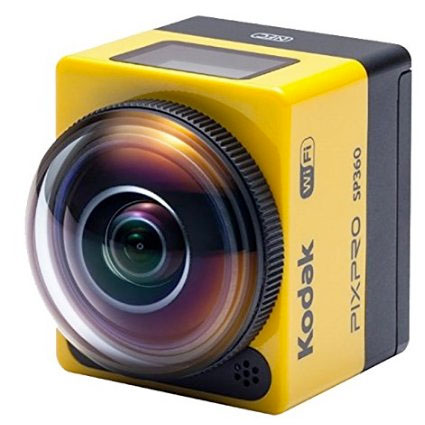 The Kodak SP360 is another spherical camera for capturing 360 degree video and photos. There’s a catch though: unlike the Ricoh cameras, it only has a single lens (not one on each side) which means it can only capture 180 degrees at a time. It’s meant to be held with the bubble lens facing up so your pictures will show the sky and all directions except the ground. For some uses, this might be enough, though if you want true 360 degree video you’ll either need to consider a different camera or get two of these things and strap them together… 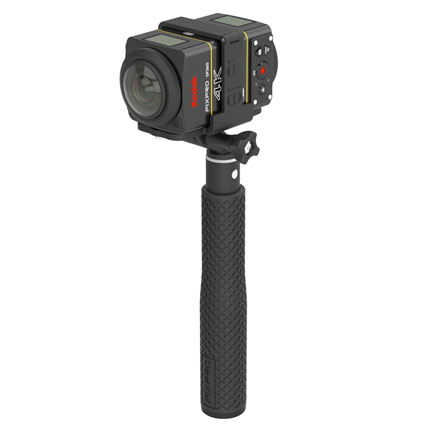 …Speaking of strapping two of these things together, Kodak also has a “pro” line which captures 4K video instead of just 1080P. It includes two of these cameras and a dual handle grip that mounts them back to back so you can capture full (i.e. “real”) 360 degree video. Their included software for PCs or Macs can stitch the resulting images together for you afterward. (And you can also get a single one of these pro line 4K 360 degree cameras if you don’t want the dual model.)

Are these 3D videos?

No. They’re panoramic, or spherical 360 degree videos but you won’t get 3D effects like you would get if you go to the movies and wear special glasses.

How does the Theta S 360 degree camera work?

360 Degree spherical cameras work by automatically stitching together the images captured by the front and rear cameras and then providing you with video files that automatically react to your finger (on a phone) or your mouse (on a computer) by allowing you to “navigate” through the video.

We’d argue that right now the best 360 degree camera is probably the first camera in this article, the Ricoh Theta S.

Is there a 360 degree GoPro camera I could get?

Not right now. So far 360 degree GoPro solutions have required you to buy a bunch of GoPros (which is pricey) and strap them all together in a ball.

Can’t I just record 360 degree video on my iPhone or Android device with an app? Why do I need a special camera?

Most phones these days do have front and rear-facing cameras so you might just assume that you can download an app to record 360 degree video. However the truth is, the “special sauce” in creating 360 degree spherical video isn’t just the fact that there are two cameras working together, it’s also the fact that both cameras are the same quality (the rear camera on my phone is smaller and worse quality than the front camera), plus neither camera has a wide-angle bubble to capture either sides. So what you would end up with is a bit of the front, and a bit of the back image in worse quality, but not the full 360 degree (or even 180 degree) view. There are a few apps that try to mimic the same effect but they don’t work very well and are often limited to only recording for a couple of seconds of poor quality video. That’s why you’re much better off buying a dedicated 360 degree video camera.